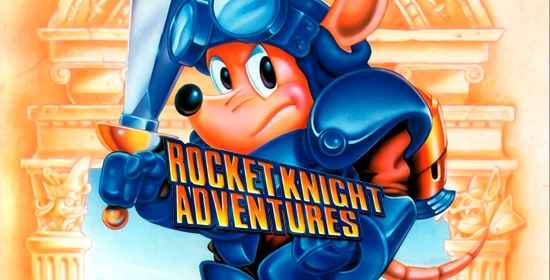 The peaceful opossum people of Zebulos have a major pig problem. A nasty race of porkers is out to snatch a legendary, world-killing spacecraft and create a galactic pigsty. It's up to Sparkster, a champion among the valiant Rocket Knights, to fire up a pork barbecue. But shades of Star Wars, his powerful nemesis is Axle Gear, a fellow Rocket Knight who's succumbed to the Dark Side.

A 'Possum with a Purpose

Rocket Knight Adventures is an energetic action/adventure game that rockets you into a feudal outer space fantasy world. If you think the story line is all over the map, wait until you meet the fast-flying Sparkster (part Jedi Knight, part Rocketeer). The side-view, multi-scrolling hack-n-slash game blasts across seven stages.

You race over land, stroke under sea, and burn through the skies of Zebulos.

This single-player game is part sword fight, part aerial shoot-em-up. Depending on the stage, you either cut a swath through the bad guys on land, I or try to outgun them as you soar.

Better loosen up your fingers, 'cause it's chop-till-you-drop time! The pugnacious Pigs put on a persistent 'possum- pounding parade. The foot soldiers and various mechanical drones keep you on your toes, but the wicked war machines and the giant robot mid-level bosses and end beasts can fry you with regularity.

ProTip: In Stage 1, the Water Dragon's head is his only vulnerable spot.

Just as deadly is the game's gauntlet of cunning traps and obstacles. You must outmaneuver such things as ebbing and flowing lava, wicked fire blasts, a deadly shower of antiaircraft shells, and more.

Rocket Knight dishes out a decent challenge within its three skill levels. "Hard" will give pros a good workout. Unfortunately, the ending is the same no matter what level you play.

At the beginning of Stage 4, stand underneath the second porthole and knock the air pirate's red bombs back at him.

Sparkster's fighting gear is simple but effective. Your sole weapon is a wicked Fire Sword, which lets loose one flame blast per button press. Also, your knightly armor sports a powerful Rocket Pack, which turns Sparkster into a marsupial missile.

The game's controls are primo. The Rocket Pack enables you to zip through the air faster than the eye can see by simply holding down a button and releasing it. With the Pack, you can even make Sparkster ricochet off structures like a billiard ball.

In addition to his hardware, Sparkster's got a nifty prehensile tail (as all opossums do).

With it, you can literally hang with the bad boys and slide like a greased pig along railings and tree limbs.

By now it should be pretty clear to any gamer with eyeballs that Konami's got 16-bit graphics down. The graphic style is cartoony and Konami clean. Sparkster, his friends, and his foes are cute critters, but the Pig War Machines steal this picture show. They're big, imaginative, and fun.

In Stage 1, it's easier to bust the Pig Tank on the bridge if you jump behind it.

The game also treats you to some outstanding scenery. There are awesome areas, like rising and falling lava that forces you to jump by using a reflection off its surface. There's also a shimmering scene where you must jump back and forth through a waterfall.

RK's sounds are sweet. The effects are clean and cool, especially blasts and explosions. The music complements the action nicely.

A Knight in Shining Armor

Rocket Knight Adventures is good, solid fun. The graphics may not be mean enough to suit the dark fancy of some hack-n-slash fanatics, but Sparkster's jet-propelled speed will blow your doors off, and the action swings. If you have a taste for a fast fight (and fried pork, too), stick Rocket in your Pocket.

Yes, it's Sparkster, and he is one awesome possum! Konami offers the Genesis another great game with this flyin' critter! Plenty of levels, technique and great graphics to keep even the most hardened game veteran entertained!

The Earthbound video game world is overrun with speedy rodentia, so Konami's preparing to trip out with an extraterrestrial marsupial. The star of Rocket Knight Adventures, is a radical, armor-clad opossum named Sparkster.

Rocket Knight Adventures is the first of what Konami hopes will be a series of side-view, multi-scrolling outer space hack 'n' slash adventures. In his debut, Sparkster will go on the warpath across seven levels against an army of porcine punks, who are led by Axle Gear the Black Knight. An empire of pigs has invaded Sparkster's homeland in a far-out world of swords, sorcery, and machines.

The pugnacious 'possum will barbecue the pigs with his mean power blade that emits a short-range burst of energy, but he has much more than that up his metal sleeves. Sparkster's space-age suit of armor sports a rocket pack that can propel him to supersonic speeds. You'll power up the rockets by holding down a controller button. Release the button and Sparkster zooms across the screen faster than the eye can see (literally)! He'll blast off into the sky or zip along the ground, depending on which way you aim him with the directional pad. At some locations, he'll even ricochet off the walls. The hairy hero will also use his prehensile tail to grab hold of tree limbs and other structures.

Konami's fine command of Genesis graphics is already evident in early versions of the game, which bodes well for the final product. So far, Sparkster sports killer looks (for a little fuzzy guy). The piggy adversaries cruise around in some of the weirdest, nastiest-looking military vehicles this side of a galactic pig sty. Moreover, it appears he'll face unusually large Porker attackers and huge Porker bosses.

Sparkster's preparing to put a little spark into your video gaming life.

Here's a super scoop -- pictures of Sparkster, Konami's latest Genesis game hero. In his world, swords, magic, and machinery collide. Armed with a sword, a prehensile tail, and a rocket pack, Sparkster's gonna swing low at CES as he battles Axle Gear the Black Knight.

this is one of segas best game this game is a very good game with your mighty rocketrang and jetpack you off to rescue the princess from the evil dr.warthog

An opossum it is! But this sure ain't no ordinary tail hangin' critter! This one is equipped with a superbly designed, state-of-the-art battlesuit! With this unique advantage, he can soar through the air and attack aerial ships and land to take on the ground forces with enough armaments to send any enemy squealing in terror. Speaking of which, your main enemy in this game is a bunch of orc-like pigs with all sorts of weaponry at their disposal. There are also plenty of bosses and midbosses to tackle and practice your skills upon to achieve better responses to the opossums actions. Beautiful detail is a highlight in this cart, and the overall cute atmosphere is quite humorous and will keep one entertained for an exceptionally long time. So stay tuned for more coverage on this soon-to-be sleeper hit by Konami!

Contra - Hard Corps
Hard Corps plays fast and furiously and is just as beautiful as any other Genesis game ever created.

Sparkster
He's back, and he's one oppumped-up opposum! SPARKSTER is jet-packin' into action as the toughest Rocket Knight to ever swing a sword.