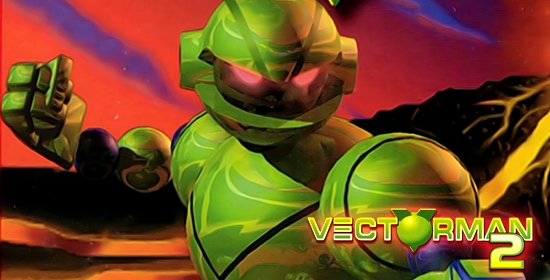 For those faithful fans who have seen their Genesis go from trusty to dusty, get ready: Vector- man is back in town, and this ball of fun just got better!

This sequel to the sleeper hit from last year is better than its predecessor in many respects. V2 has cleaner graphics, more sound and voice effects, and faster, smoother gamepiay. Add to this spectacular and complex levels, and you have the makings of a Sega classic.

Rendered, next-gen graphics (all the rage these days) are incorporated into this 16- bit title. Minor touches, like better light-sourcing, help make V2 a treat for the eyes.

It's not so much a treat for the thumbs, though. The game is tough, with steady shootin' throughout. However, its humor (like a lava level called Magma PI) makes the time pass quickly.

Vectorman 2 injects a little life into the slowly fading Genesis market. Don't move on to next-gen until you've given this last-gen title a shot.

Smooth rendering and 4 5 gorgeous backgrounds are offset by slowdown in some areas and a lack of detailed enemies. Also, you'll see variations on the same enemies over and over again.

It's a two-button game: 5.0 you shoot and you jump (and jump higher by tapping the button twice).

The sound effects are right on target, and now Vectorman speaks, with phrases like "Needed that" and "Yes!" interspersed throughout the game.

It's simple, mindless fun-just like the good old days. Vectorman 2 is the most addicting Genesis game this year...and it may be one of the last, so enjoy!

Vectorman cleaned up on the Genesis last year, and at E3 Vectorman 2 looked ready for a repeat. This time the Earth's toxic mess spawns a mess of mutant insects, and the V-Man's recruited for run-n-gun pest control. This 32-meg action/adventure game will again showcase Sega's cool vectorpiece animation technique as Vector- man busts a bunch of new morphs, including the Chute, the Skate, the Tank, the Tornado, and the Rhino. Sega's also about to announce another "Play to Win" contest this year for the first gamer who beats Vectorman 2. That means mucho bucks!

Boy, were we surprised when this one came winging in right under the wire at press time.You readers have been writing letter after letter to the VG offices, asking us if this cart would ever be a reality. Now we can finally give our answer: It sure is!

As we went to press, our info on Vectorman 2 was pretty sketchy, but we're not completely in the dark. Vectorman 2 apparently takes place in a wilder and weirder world than the first. Whereas Vectorman's opponents in his maiden voyage were predominately robots, in Vectorman 2 he's up against a whole variety of nasties from the animal kingdom, including crazy army ants, giant fleas, and putrescent pusbags.Vectorman himself has a few new morphs to show off. In fact, one of his new powers is called the Assimilation Morph:Vectorman can actually take on the characteristics of certain enemies by shooting his hand out at them. Seems like Vectorman's turning into a flesh-vampire. Cool.

Original Vectorman developer BlueSky is masterminding the sequel, and it doesn't look like it's holding out on anything for Vectorman's second performance. Expect this cart to take your Genesis to the very limit of its processing power. More news next issue when we return from the E3 show. Stay tuned!

Ballz 3D
Do you have Ballz? Well, you will need them in this knock down, drag out game of blood and brawling action.

Blaster Master 2
This is an action platform game. You control S.O.P.H.I.A. that can roll, jump, and fire two different kinds of attacks at enemies.

Rendering Ranger
It's a side scrolling action game that is gun-oriented. A high score screen is present and there are many different types of laser guns to acquire throughout the post-apocalyptic adventure.