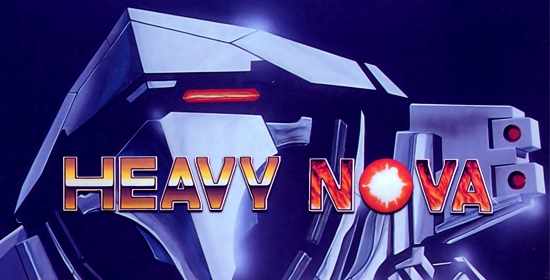 In the 21st century, aliens from the planet Akirov create peace on Earth, but goodwill towards men is not part of their game plan. Now the Akirovians want Earth for their own.

Heavy Nova is a hard-hitting, robot beat-em-up by Bignet U.S.A. In this far-flung future, wars are fought with remote controlled warriors are called DOLLs (Defensive Offensive Lethal Liberators) and there's nothing cute about them.

This game deals enough robotic hand-to-hand combat to keep your steel fists in a rage for hours. You can also challenge a friend in the two player mode.

ProTip: In tight situations, use your thrusters and you become temporarily invincible.

In Heavy Nova the fighting doesn't take you far, but you get a good workout. The game consists of two missions and a total of eight rounds. Mission 1 consists of three somewhat easy rounds, which train you for the real battles later on. You walk from left to right and usually you can kick to pieces anything (except a force field) that blocks your path. Finish these prelims to graduate from training and begin the five rounds of Mission 2, where the enemy DOLLs get really nasty.

The objective here is quite simple, just beat'em to a metal mess! But remember that they have the same objective against you. Each DOLL has 15 different moves. As you fight the boss DOLL, you can use offensive attacks, which include Back Uppercuts, Jabs, Punches, Knee Trips, High Kicks, One-Arm Throws, and Pile Drivers. You can also toss combinations. Each hit you score on an enemy DOLL saps its energy.

Unfortunately the gameplay takes time to master. The button presses are simple but the button pressing is mushy. Also, the move that you use depends on your position, your proximity to an enemy, and how much power you've stored up.

In the heat of battle these factors can be tough to monitor, so sometimes it's tough to plan and execute a cohesive attack.

Don't be afraid to move in dose for a throw!

Heavy Nova fights a good fight. This game is definitely original with a complex storyline. The metallic knuckle-bustin' gets your adrenalin pumpin', and the graphics are rich with fluid animation in the DOLLs. The sound track's pretty hot, too. The game does get repetitive, so the two-player feature is a definite plus. If you're into heavy metal martial arts, check out Heavy Nova.

Heavy Nova was such a hit when it landed on store shelves that Bignet is releasing a sequel with the working title of Heavy Nova II.

If you remember, there were some points in the game with no enemies. That has now all been changed. Everywhere you walk, there will be enemies for you to attack! There are 10 stages of one-on-one robot action, along with more animated cinemas that will be part of the new CD-ROM version. Expect this to be one of the first third party Mega CD discs.

Battle of the 'bots!

If you're into robotics, and you're into fighting games, then this is the one for you. Heavy Nova utilizes a new type of character for a Genesis fighting game... a robot. Boasting 8 meg power, and smooth graphics, it seems like your inside the game, watching the action take place. The countless fighting moves roll out very realistically, and count for a lot of the excitement in the game. Another addition is the one on one boss batties, in which the bosses use different fighting techniques than you, for an oven wider variety of moves. Your missions throughout the game are really just training for the robot, so be alert. There are enemies large and small, and there are also many obstacles to overcome. After each boss battle, you learn a few new fighting techniques. There is also an impressive cinema display betore the title screen appears.

You have been transformed into a half robot half man and you must wipe out the enemy.

In this Street Fighter-gone-robotic beat-em-up you play a highly specialized robot called a DOLL and go head-to-head against either the computer or a friend. You begin the game by playing through two, rigorous training rounds. You're then whisked off to an alien planet where you destroy a series of robot heavies as well as gargantuan end-of-stage bosses. Get heavy, get metal, get robotic with Heavy Nova.

In an era of frequent alien attacks, the Earth has a unified Government, which relies on a line of cyborgs known as the Heavy Dolls for defense. The greatest of these are known as the Heavy Nova, a title earned by passing a rigorous training regime.

You are taking on the simulated proving grounds, which are split into two styles of alternating action. In the first you must progress (initially purely horizontally, though later with vertical flick-scrolling as well) through a hostile environment of enemies, bombs and traps, gaining points for doing it quickly and with lots of energy left. Initially you can fly and kick as needed.

Once this section is complete, you move on to one-on-one combat of the Street Fighter 2 style. The early foes have far less energy than you begin with. As you progress through the game, you are awarded extra attacking moves, in a manner similar to Brutal: Paws of Fury

Rise of the Robots

Robot Wreckage
Robot Wreckage is completely free. You may play it as much as you like without paying a single buck. Fight lots of robots and try to defeat them all. You can customize your own robot in the assembly room and measure your fighting skills with it. There is also an arcade mode available