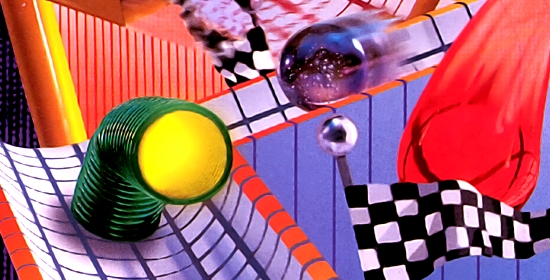 Get Set for the Craziest Maze Race Ever!

In the Milton Bradley Nintendo version of this Atari Games arcade classic, you must maneuver a marble over, around and through some of the most insane three-dimensional mazes ever created. You must also contend with an odd assortment of equally absurd creatures that range from "steelies" that knock you off course to acid pools to disappearing floors!

In your quest for the goal line which rests at the end of each course, you can take advantage of a number of traps and short-cuts that can cut your track time in half. That's important since you receive a hefty bonus at the end of the game's sixth level for quick hands!

Marble Madness is a good looking translation of the quarter-munching coin-op (masterfully animated and programmed by Rare over in the U.K.) that also captures many of the game's features like a two-player simultaneous mode. True, some of the secret short-cuts and tricks are missing from this version, but the pseudo-3-D visuals, snappy audio, and originality found in Marble Madness greatly outweigh its short-comings. A bit short (there are only six levels), but fun nonetheless!

When I was younger, I had a toy called a labyrinth. This game of dexterity had two knobs, each one tilting the top level of the wooden "table" in a direction - left/right and forward/back. To begin the game, a marble would be placed at the location labeled Start. The object of the game was to ever so slightly turn the knobs so that the marble would follow the path that was painted on the surface of the labyrinth. This in itself was hard enough, but making the contest even more challenging were the holes that lined the pathway; falling in a hole would end your game.

Now that video games have replaced the bulky games of the past, you can compete in a similar manner on a TV or monitor. And one of the older arcade classics, Marble Madness, puts the labyrinthian concept into a cartridge for the NES (Milton Bradley) and on disk for C-64, Apple II/GS, IBM PC, Amiga and Atari ST computers (Electronic Arts). Though it replaces the knob control with simple joystick or control-pad manipulation, MM is enhanced with a series of enemy creatures that no labyrinth could ever contain. This strategy guide uses the Milton Bradley/NES version as a reference, but computer players can use these hints to help them get through any version of Marble Madness.

The object in this game is to guide your marble over six terrains, each containing winding passages, tunnels, ice sections and other hazards. In fact, when you get to Level 5, which is called the silly race, your control is turned all backward - what's uphill becomes downhill, and there's even a part of the puzzle where enemies help you. Getting through all six mazes is extremely difficult, requiring precision control over your marble.

Recently (or maybe not so recently), video games have come under fire for their generally violent themes. Although it's true that most of today's video games contain much punching, slicing and blasting, people who are offended by this violence do have recourse. There are, though they are in the minority, several nonviolent games, including such diversions as Pac-Man.

Strangely enough, these nonviolent games have proven to be popular with all game players, not just with the gentler folk. Why? Originality. Violent games tend to be derivative, each a copy of the previous one, while the nonviolent games are almost always unique. Their creators have striven to develop something different and yet still fun. And with Marble Madness, they've succeeded.

In Marble Madness you guide a marble through a three-dimensional maze, trying to get to the goal in the least amount of time. When a maze is completed, you are awarded points based on your performance. To spice up the challenge, two people may play concurrently, both racing for first place. The only hint of violence in the game is a player's ability to knock his opponent's marble from the board.

You guide the marble using the control pad, with the "A" button providing "turbo charge" (extra speed) when needed. Because of the pseudo three dimensional display, it takes a little getting used to the control mechanism. To help you more quickly overcome this difficulty, the pad's directional relationship to the screen can be set up in two ways: you may use the control in its normal position or you may use it rotated 45 degrees. Which setup you pick is purely a matter of taste.

The marbles are delicate creations, and those that drop too far will shatter. Luckily, you have an unlimited number of them. Still, a smashed marble means wasted time, so it's best to be careful. Time is important; you must get to the goal before your clock runs out. If you don't make it, your game will be over. On the positive side, any time left over after reaching the goal will count toward bonus time for the next round.

Because the screen does not allow a split display in a two-player game, the two marbles must remain close to each other. To handle this problem, if one player gets too far ahead of another, the lagging marble is moved forward and sustains a time penalty. Although this is a clever method for keeping the marbles together, the time penalty doesn't seem high enough. Sometimes, in order to get past a particularly difficult obstacle, it is an advantage to lag behind and force the game to move you forward.

Speaking of obstacles, there are, of course, many to overcome. These include pools of acid, Marble Munchers and vacuum cleaners. The mazes act as obstacles as well, since they can be traversed in a number of ways. If you can find and use a short cut (short cuts are generally treacherous), you'll be awarded extra points.

Magic wands, hidden throughout the mazes, add precious seconds to your timer. It seems, though, that the wands are random events; that is, their locations defy memorization. A square that contains a wand in one game won't in the next. Another problem with the wands is that when a player in a two-player game discovers one, both players are awarded the extra time.

All in all, Marble Madness is an original and playable game. You'll need a high frustration tolerance to get used to the controls, but once you get the hang of it, you'll find it hard to stay away. This is a true original.

It'll crack you up!

Marble Madness, the smash arcade hit, is now available for the Game Boy! In this game, you'll lose your marbles in more ways than one! You'II go nuts trying to guide your glass marble down the fierce slopes and obstacle courses, thwarting dangerous drops and mischievous enemies all the way! Careful, the acid pools melt you on the spot, the marble munchers will make a quick lunch out of you, and the black marble will try to shove you off the edge! It'll take all of the skill you can muster to swerve your way around these threats and get to the goal in time! Losing your marbles shouldn't be this fun.

It drove you bonkers in the arcades. Now this mixed-up marble marathon is ready for your Nintendo, courtesy of Milton Bradley. The challenge is to roll your marble to the hidden Goal Line on six treacherous 3-D raceways. Every corner's a cliffhanger. And every second counts!

Each raceway is a unique maze of tricky terrain and marble menaces. Can you stay in control as you hunt for the goal? You'll teeter up, down and around narrow ramps and ridges. Sneak past hungry Marble Munchers. Battle nasty Steelies for the right of way. It's enough to make you lose your marbles!

Playing Tips: When you first start playing Marble Madness, learn how to control your marble around the boards. Once you've mastered the beginning techniques, memorize the different 3-D landscapes. They'll always be the same and each one holds a number of different paths to the Goal Line. Maintaining control of your character, however, is the most important part of the game.

Marble Madness has finally made its way to the Genesis! All of the levels have been faithfully reproduced on this new cart. You play the part of a marble and you must make your way through the twisting and turning levels. There are many traps and enemies to avoid, like the vacuums and the acid. Join up with a second player for even more fun!

Attention computer buffs, classic arcade and NES fans - the most unique race game of the past is heading towards 16-bit! It is your job to guide a marble through six perilous races before the time runs out. Be careful out there, as many different dangers lie ahead! These dangers include absorbing acid slime, leaping Marble Munchers and endless heights of unprotected ground.

The object of the game is to reach the goal marker with as much time as possible. You have an unlimited number of balls, so if you fall off an edge and smash into a pile of rubble or get inhaled by a Vaccuum, you will just lose time. The terrain is tough, the challenge is difficult, but it is your job to make it through! If not, then either you will be swept up by a dust broom, smashed into little pieces, or knocked senseless. Take care, this is going to be one heck of a race!

Published by Electronic Arts, Inc. and developed by Atari Games Corporation, this arcade video game was released in 1986.

Limited in time player using trackballs has to race marbles through an isometric Escher-esque labyrinth. Marble Madness is quite a short game, with the six levels, that rarely last longer than five minutes. Despite that, the game has got high degree of challenge, pleasant theme, great sound and graphics.

You can play solo game, or the two players may compete against each other. The last one is harder, and to compensate each player is allowed to go on with the game once, and gets bonus time for beating the other player to the finish line. In the solo game, the player can use both trackballs at once, letting more-rapid changes of direction. There is a training level "Practice", then go harder levels - "Beginner," "Intermediate," "Aerial," "Silly" ("Everything you know is wrong", the stage goes from lowest point to highest point, etc) and "Ultimate." A small range of enemies is spread through the levels, but your greatest foes are the levels themselves, containing many unexpected drops and treacherous passages.

Sonic 3D Blast
Gameplay involves running around different areas collecting rings and power-ups, jumping on robots, and gathering up the furry animals that are released.

Spindizzy Worlds
A new dimension has been discovered with a mysterious artificial world hanging in space and the player, as Trainee Cartographer for Unknown Worlds, has been given the task of mapping this new world. The player has been equipped with a Remote Scout Craft,