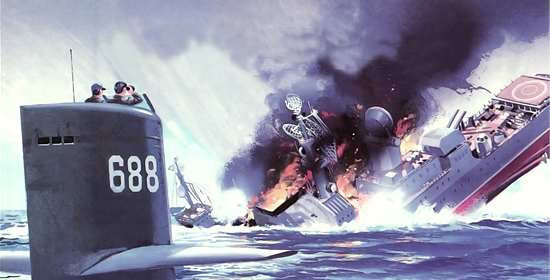 Up periscope! You are the brilliant commander of a heavily-armed, nuclear submarine. Highly detailed subscreens monitor speed, depth, bearing, course, and X-Y coordinates. Check with your radio to find out what mission beholds you today. Afterwards, scout your targets and plan a strategy for their destruction! One hit, though, and you're sunk! This is a very real combat simulation for would-be captains of all ages.

I guess if you like simulations then 688 is something worth buying. I, for one, was not terribly excited after playing 688 for a while. But then again, RPG's are more my speed. The graphics are better than average as is the sound but this is just another computer game on chips.

Blah, blah, blah...Huh?!? Caught me sloughing off. The problem with 688 is the lack of EXCITEMENT, a new word to some people! Graphically, 688 is superb and the digitized voices are well done, but unfortunately, these factors alone cannot save a game from the depth charge...

Take command of the most advanced sub in the world. In this super simulation pilot your sub through enemy infested waters on several different missions or varying degrees of difficulty.

With the expanded memory capacity of the 16 bit Genesis System software, highly detailed and complex computer games and simulations are now able to be converted to cartridges. One of the first to be brought over is 688 Attack Sub by Electronic Arts. This game is a submarine warfare simulation with you in control as the captain. Get your mission orders and develop your attack strategy. Since it is a very real simulation you have control of all of the functions of the ship. Call up the sonar and you can see what is happening below the surface or raise the periscope to see the enemy on the surface. Speed, depth, bearing, course, range to enemy, damage control, X-Y grid coordinates, it's all there and much, much more. No detail has been overlooked in this game. Easily, the best battle simulation ever made in the cartridge format.

688 Attack Sub is a submarine warfare simulator that combines enough of the tactical elements of actual submarine warfare with a simplified control scheme to provide gamers with a very entertaining gaming experience.

In 688 Attack Sub, you can command either an American Los Angeles-class submarine or a Soviet Alfa-class sub. Learning to control the submarines is straight-forward: a main screen shows the conning tower (control room) of the submarine. Various stations for issuing commands are available, and you can choose the station you need by moving the cursor to a particular station, then pressing the fire button.

The cursor changes shape to indicate which station is selected - for example, it becomes a spark when you select the radio room and a torpedo when you select the weapons station. Other areas include navigation, the periscope, helm, damage control and sonar.

When you select a control station, the screen changes to a secondary screen that shows the details of that station. For example, the helm displays the engine controls, depth controls and the autopilot. Most of the stations also show a map and a number pad for issuing commands. Issuing commands is a matter of placing the cursor on the appropriate button and pressing fire. Of course, the fact that the controls on the Russian sub are identified in Cyrillic complicates things somewhat!

Controlling the 688 Attack Sub simulation has been considerably simplified compared to real life. For one thing, you can pinpoint targets on the map, then set a "way point" from the navigation screen and have the autopilot guide you there (you still control depth and speed). Multiple way points can be set so that the sub follows a predetermined course while you concentrate on other things. Just be careful not to dive too close to the bottom of the ocean. To help you stay up-to-date with the state of your sub, all the screens that have maps also feature a "head-up display" (HUD) much like a fighter plane. This shows your depth, heading and speed.

Another simplification is that you can pick targets with your cursor as they appear on the map, and launch torpedoes (or missiles in some scenarios) at them right away. When a target is identified, it shows up on the map as a letter (rather than just an "x"), and acquiring the item as a target identifies it in the target area at the top of the window. The sonar is quite capable - you have passive listening devices, active (ping) sonar and can even tow a cable of microphones to increase sensitivity and range. The more of your tools you use, the better the chance of getting an ID on your targets. Unfortunately, the more sonar you use, the better the chance that the enemy will detect you and counterattack.

The periscope is the most general purpose station, enabling you to see your targets (if you are at periscope depth), switch to the map and acquire targets and even launch a torpedo or missile at the target. The graphics of the enemy ships blowing up and sinking are pretty good, just don't get carried away watching the carnage because someone might sneak up on you.

Overall, 688's graphics are only fair, not at all up to the abilities of the Genesis. The sound, though it features digitized voices, is also mediocre and has quite a lot of static. All of this is unimportant, however, because not only is 688 very playable, but you can adjust the difficulty level in several ways so that it is not overwhelming to a beginner. The game includes ten different scenarios, and in most of them you can play either the American or the Russian side (with differing objectives, naturally). The scenarios range from anti-submarine warfare to full-fledged attacks on enemy convoys. Your complement of weapons varies for each mission - you even have Tomahawk cruise missiles on one mission. Overall, the game is challenging and highly recommended to enthusiasts of submarine simulations.

Game appears totally worthless on the PC. You can get your "mission orders" in the radio room in the beginning of the game. After that, nothing. There is no option to continue the mission and begin playing the game.

688 Attack Sub is a submarine simulator game designed by John W. Ratcliff & Paul Grace, published in 1988 for MS-DOS systems and 1990 for Amiga computers by Electronic Arts.

The player takes command of a US Los Angeles-class or Soviet Alfa class nuclear powered attack submarine and plays 10 missions organized into a Cold War scenario.

688 Attack Sub is known as an early classic of the genre.

688 Attack Sub is a classic modern submarine simulation which puts you in command of either the American Los Angeles or the Soviet Alfa class nuclear-powered submarines. Most of the systems you would expect such as sonar and periscope are featured and nicely presented in VGA. The game offers ten missions for both the Soviet and American side in a Cold War scenario, that grows progressively hotter. Nice to see that the two sides' submarines have their own graphic sets in the game, even with some pseudo-cyrillic labels on the Russian side.

Overall, 688 Attack Sub is an interesting early subsim and certainly a classic in the genre - arguably the best subsim for PC until Dynamix' Aces of The Deep years later. Especially the modem-play option was outstanding for its time. Be sure to download the manual, although the game is well laid-out and can be controlled completly with the mouse.

The plot of the 688 Attack Sub game is simple fare, you are the captain of either an American or Soviet sub and must play through a series of increasingly difficult missions. Graphics-wise the game was quite good for it's time, some of the fractal effects especialy were impressive. Those who like to tplay things at a slow, tactical pace will especialy like the game, and with many ways to complete each mission it's likely that you will through the game again when you finish it.

The Hunt for Red October
The video game based on the book was released in 1987. The player must navigate the Red October towards U.S. waters while avoiding the Soviet Navy.

SeaQuest DSV
The player takes the role of the captain of the submarine seaQuest DSV 4600, and is tasked with carrying out a series of missions in a series of levels, divided up as "ocean quadrants".

Super Battleship
Super Battleship is a great game for fans of the classic board game or those who want to test their sea legs and blow some stuff up at the same time.