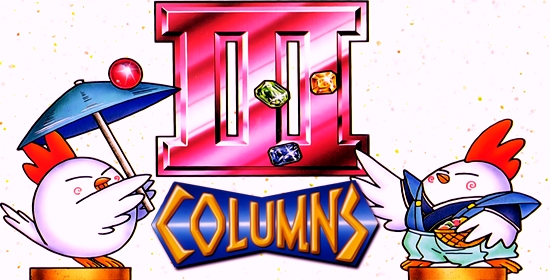 Welcome to the world of Columns, where you must crush gems as they pile their way to the top of your screen. Maneuver the multi-colored jewels around the screen and align three gems of the same color horizontally, vertically and diagonally to crush them and make them disappear. You can go against the computer or up to four other players in a Multi-player Competition Mode. When playing other players, use your skills to sabotage the other opponents and avoid attacks on yourself. See who is the true master of Columns.

The power-ups--they make the cart more than just a simple puzzle game.

When playing against the computer, there aren't many levels to play through once you master the game.

Having your controls reversed and your play field turned upside down! Not fun.

In pursuit to create the next "Tetris", Sega of Japan has improved upon their popular game Columns for great results. First off, you will see the graphics have improved tremendously, and secondly, up to five players can compete at once. Imagine the intensity and fun of five friends taking out their frustrations on one another! It's great; if you love action puzzlers, this hits the mark.

Columns 3 - Revenge of Columns has long been regarded as the nemesis of Tetris. Arrange the falling jewels to form a horizontal, vertical, or diagonal group of three of the same color.

Columns 3 - Revenge of Columns is a third game in the Columns series. In this fast-paced puzzle mayhem, your goal is to arrange three or more jewels of the same colour horizontally, vertically or diagonally to remove them from the playing screen. While the jewels are falling, you can change the order of their colours.

In the Arcade, Versus, and Time Trial modes, you can test your skills against an opponent, a clock, or a specific task such as removing a particular jewel. New features include a rising bar that can be used to annoy opponents and magical items that have strategic value to alter the outcome mid-game.