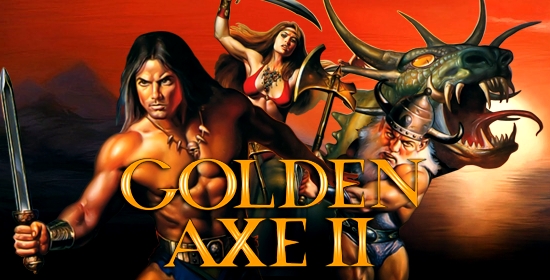 The three champions of truth, justice, and the Sega way -- Gilius Thunderhead, Ax-Battler, and Tyris-Flare -- were bored to pieces. Since they double executed Death Adder and Death Bringer in Golden Axe they had little to do but sit around campfires and brag about their accomplishments to disbelieving audiences.

Then suddenly a cloaked messenger stepped out of the shadows and proclaimed, "The Golden Axe has been stolen from the weapons vault once again. Our king has summoned you to defend our country from the deranged creatures of Dark Guld". The companions slowly nodded, fastened their sheaths, and prepared for a return to Golden glory.

Old hacks will find Axe IPs gameplay nearly identical to its predecessor, a side- view blade-buster set in a medieval fantasy-land. Two versions of "Axetion" are available: the Duel, a player-versus-player or player-versus-computer practice session and, of course, the Normal arcade-style game. You can go it alone, but the two-player simultaneous mode is twice as fun and double trouble for the enemies. Unfortunately, it's also doubly difficult for you because two heroes must share all three continues.

Combatants choose between Gilius Thunderhead, a dwarfish mini-axe ace; Ax-Battler, a fearsome sword-slinger; and Tyris Flare, a master of amazon fighting techniques. Each character has personalized moves and attacks, including some a bit different from the original Axe.

ProTip: Gilius and Tyris work better as a team.

A long trek through thick and thin terrors awaits our main monster-mashers. You must complete six stages of action which span ransacked towns, creepy caverns, and a heavily fortified castle, before you even get a glimpse at evil incarnate himself, Dark Guld.

It's not clear if Dark Guld is a new- name version of Death Bringer or a different villain altogether, but he's got great taste in royal weaponry plus a batch of brutes to back up his foul deeds. Of course basic "cannon fodder" (humanoids) pollutes the beginning levels of the game, but as you progress to higher levels you'll bang shields with grave-robbing skeletal warriors, tail-whipping lizard men, and spell-chanting magicians. The steroid-case bosses include twenty-foot tall trolls and headless knights in shining armor.

Some of the smaller nasties ride mythical creatures, like a fire-breathing wyrm and a tail-snapping beast, but you can mount them once you dispatch their riders. Make it a point to capture these scaly critters because your lives could depend on it.

Try Gilius' ring-around-the-axe spin to trap giants wielding clubs against the edge of the screen. Avoid close-quarters combat or they'll shoulder-flip you.

Enchantment of the Axe

One of Axe I's most innovative features is back -- each character has a different sorcerous ability which you can use as a last-chance neck saver. Knock out the wizards and grab their spell books -- each one boosts your magical strength. Gilius can master Earth magic up to a power of three, Ax-Battier's tornados reach level four, and Tyris knows fire to the power of seven. The speiis look different from Axe I but have the same damaging effects. A new option enables you to use only a portion of your incantations instead of the whole collection at once.

Use minor magic against wizards and your spell points are restored immediately as the wizards drop spell books.

We know you've been "axeing" for Golden Axe II for ages, and yes, it's a welcome addition to the Genesis library.

But before you pay for your play, there are a few things you should know. Although the graphics and animation are pretty nice by 16-bit standards, in some places they don't live up to Axe Ps reputation. The music is able but sounds compared to the emotional, hard-rockin' beats from the chapter in Axe history. One particular the spine-tingling death scream from Axe I, has been watered down to an obnoxious "blah" here. Axe IPs challenge can be adjusted, but the game is no longer than the original game. A final cut against the sequel is the unduly booooring end sequence.

In a nutshell, Axe II is a fun free-for- all which may not be a step forward for Axoholics, but isn't a step backward, either. Any complaints are in the “too bad” department and don't overly detract from an otherwise solid slice-n- dicer. So if you've got an axe to grind, even if it's a bit rusty, grab a friend and take a swing at Golden Axe II!

Death Adder is back, and only the magnificent three warriors of the realm have even the slightest chance of stopping him! Death Adder has stolen the Golden Axe once more, and this time his minions are twice as powerful as before. Choose from Ax Battler, Tyris-Flare or Gilius Thunderhead, each powered by his or her own special brand of magic. Play with a friend, or take on evil alone. Good luck!

The usual goal of a good sequel is to try and offer something new and different to game players who enjoyed the original. While Golden Axe 2 is not a bad game, it didn't have anything that could be termed awesome. There are some new features, but overall this is Golden Axe with some new scenery and enemies.

If you liked the original Golden Axe, like I did, then you'll enjoy this update that features new characters, magics and some nice graphics for the Genesis. Although the action has remained faithful to the original in most respects, the addition of new options improves upon the original in many ways.

Axe 2 isn't a total let down but it shows little or no improvement over the first. The graphics detail is lousy and the animation is lacking. The game has a few new features that make it more fun to play. You can throw enemies into each other. The only thing that was improved is the magics. Even the music isn't as good.

I was slightly disappointed with Golden Axe II. The sound effects were absolutely horrible, and the graphics, while well drawn, were poorly animated. Even the ending was a let-down. The new magics and special moves are cool, however, and the good play control helps to keep the game respectable. It should be better.

The sequel to the legendary Golden Axe is on it's way! This version has many of the unique features of the original, but with much improved graphics and harder enemies.

As good as the first game was, the sequel is that much better. With smoother animation, better game play and graphically intense magic spells, GA2 will be one of the hottest Genesis softs this fall!

Golden Axe II revisists the hack 'n slash action of the Sega smash, Golden Axe. The three original heroes are back in an all-new multilevel action/adventure. Your favorite Axer totes the same weapon as in the original adventure, but there are also some all-new maneuvers and techniques, as well as some cool new magic. If you loved Golden Axe, take a swing at Golden Axe II.

You've just escaped from the lava tunnel. A pack of razor-clawed creatures are trying to get you before the lizard men do. Suddenly the Warrior is slashing his way through a nasty gang of demons. He body slams one and gets two more with his sword. The Amazon does a backflip and tosses off an attacking Minotaur. Now the Dwarf is spinning on his battle axe, devastating several skeletons at once.

These are moves you've never seen before. The Warrior, Amazon and Dwarf are deadlier, stronger, more agile. Their enemies are more evil. And the magic is killer.

The Warrior summons the wind to blast an enemy. The Amazon strikes down a headless knight with scorching flames. The Dwarf commands huge boulders to flatten his foes. A fire-breathing dragon carries you toward the castle where Dark Guld is waiting to put out your lights.

Golden Axe II is a sequel to the original Golden Axe and is a side-scrolling fighting game released for Sega Mega Drive/Genesis. The game was published in the second Christmas day of 1991 and appeared for three other platforms, Wii, Xbox 360 and PlayStation in the last years.Boris Vallejo, a well-known fantasy artist known for creating Conan the Cimmerian, was also the creator of Golden Axe II.

There are three playable characters in Golden Axe 2. There are actually the same players as in the first game, Ax Battler, Tyris Flare and Gilius Thunderhead. Their mission is now to defeat the new evil clan led by Dark Guld. They have to claim the Golden Axe again, after doing so in the first game from the villain called Death Adder. There are seven levels in this game, six on them being side-scrolling. The last one is a simple battle against the main antagonist, Dark Guld.

The gameplay is very similar to the one in the first game. The player can control the same three characters, each one having its own strengths, weaknesses, weapons and spells. Though the characters were mainly the same as in the first game, the “back attack” was improved. Enemies could also be thrown in every direction using the D-pad, so you could hit other enemies with them.

The magic system, which was very important in the first game, was totally overhauled in the second one. In the first game the players could have only used their whole magic power when casting spells, but in the second game they could have just release the magic spells button when the meter has reached the wanted level. The spells for two of the players were changed as well. Ax Battler can in the second game cast with wind magic and Gilius Thunderbird can use rock magic instead of lightning. Tyris Flare retained her fire spell.

Golden Axe II featured two types of game modes. “The Duel” was the one where players encountered enemies in the middle of an arena in a tournament-style battle. Winning and going through the next round is always putting in front of the player a more difficult enemy. The “Normal” mode is where the player follows the story and retains the Golden Axe.

The first game was popular, but the second one was split between two main opinions. One of them stated the game was a rehash of the original one, while the other considered the game was better than the original release. The graphics of the sequel were drastically improved. Many people were disappointed with the lack of any new character or the lack of technique improvements.

More than 400 users rated the Genesis game on GameSpot with a total average of 8.0, while press and critics tied to GameSpot rated the game with 7.6 out of 10.

Knights of the Round
A side-scrolling beat 'em up based loosely on the legend of King Arthur and the Knights of the Round Table, the game features an RPG-like level advancement system, with fighters getting new weapons and armour as they advance through the game.

Onslaught
When your homeland is ravaged and your family is slaughtered, you stand alone in your vow to capture the barbarians responsible.

Pirates of Dark Water
Go on quest to save the world in The Pirates Of Dark Water. Take control of one of three characters, each with unique abilities.