Landstalker - The Treasures of King Nole 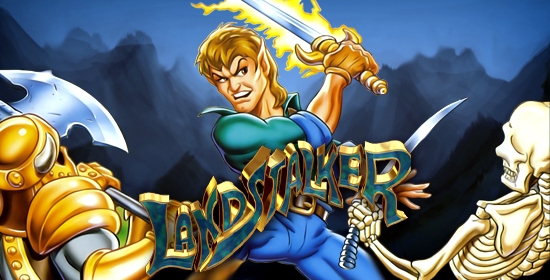 For a fortune hunter with good thieving skills, the world is an open treasure chest.

Sega hopes to fill your RPG chest this holiday season with Landstalker, an action/RPG game that's awkward to play, but cool to look at and a lot of fun.

ProTip: Put the Record Book on the Altar so the Priest can record your adventures. The next Record Book is in the Gumi Village. If you're running low and you've traveled a lot, come back and record your travels.

Stalk of the Town

You are Nigel, a young fortune-seeker in search of the legendary treasures of King Nole. In this good-looking 3/4 overhead-view game, you must search for a variety of objects while gaining Strength and solving perplexing riddles.

The action's familiar fantasy fare. You start off merely swinging your sword, but you can move up to a better blade, different types of armor, and headier headwear. The battle gear helps you grab enemy gold, which you must have to buy Restorative Herbs, Magic Spells, and other useful items. Along the way, you make friends and enemies, travel to distant villages, and explore mucho caves.

Don't worry, the epic turf-pounding won't land you in a rut. Part of the game's worthy challenge involves a puzzle element, where you must move blocks, jimmy doors, and slip past obstacles. When it's the right time for fight time, it takes fierce finger fencing to dispatch a menagerie of' weird characters, including poisonous toadstools, gargoyles, and assorted thugs.

Challenging in a not-so-fun way are the diagonal game controls. The on-screen action moves at an angle, so you spend most of your time pressing Up-Left or Down-Right to move around the screen, rather than the normal Left and Right directions. It takes a while to get used to the movement and the controls. If your Genesis directional pad suffers from the mushies, Landstalker's a pain in the thumbs.

You can jump on bushes and climb hills when you're refused entrance to certain places.

The graphics in Landstalker are good, but they make you work. In general, they're colorful without getting too cute.

Although the sprites are large and well- defined, the game play area is restricted by the K-overhead view, so you won't see any titanic battles going on in front of your eyes. Depth perception is a bit problematic, so determining the right angle on a jump is usually an educated guess.

The music adds an element of cinematic panache. It always accentuates a mood, whether it's light and cheerful in the villages or dark and menacing in the caves.

Landstalker will amaze you for hours with its complexity, amuse you with its graphics, and frustrate you with its controls. You'll stick around, though, because it's fun. If you like more to your RPG than charisma levels, magic points, and character development, then take this hack-n-slasher tor a good, long stalk.

Land Stalker is a 16-meg masterpiece by the Climax creative team at Sega! This game features a perspective as if you were observing the action from a distant building.

Land Stalker is a blend of old-fashioned ingenuity and high-technology data. The 3-D scenes were first drawn up by artists that created a perfect setting and turned them over to computer graphic designers.

The result is an unparalleled combination of form and function. You can travel around the towns and visit key areas that may hold items you will need. Venture out of the town and into the underground caverns to kill off enemies that threaten the peace in your world.

There's a collision going on in Japan and gamesters everywhere are going to benefit from it. Two game genres -- action/adventure and role-playing -- are coming together to spawn a new fleet of hybrid games that seek to offer the best of both styles. One such offspring is Landstalker by Sega for the Mega Drive.

LandStalker combines a teniffic-looking overhead action-style view with a massive interactive 3D world to create a new RPG dimension. You play Roy, a young elfin boy, on a search for the ultimate treasure. Treasure huntin' can be lonely business, so you find companionship in a tiny 12-inch faerie named Furaide. This magical character is part bat, part human and she knows the secret path to the ultimate treasure. Furaide will stow away in your backpack, and help you if you keep her safe from the evil Kaara and her men.

As an action RPG Landstalker doesn't limit itself to typical RPG formats. For example, to beat the beasts you don't use a tactical fighting interface. Instead, you launch a hack 'n' slash, button-press attack with Roy's sword when evil enemies come within sword-swinging range. As you travel from city to city, the game play maintains an action-style point-of-view with good-sized character sprites. The game doesn't downshift the magnification as some RPGs do, so it keeps the action/adventure feel of the game.

In this beautifully animated world, you've gotta use your brawn and brains to fight nasty creatures and piece together clues in order to enter the dangerous caverns where you'll find great treasures. You can climb to new heights on multiple levels and platforms. Sometimes you must move obstacles around and even stack them to reach higher objects.

Of course, Landstalker maintains classic RPG ties. You must build up your character traits and amass strength to fight. A life meter shows your current strength, which can be increased with herbs or a good night's rest at an Inn.

You can carry money, weapons, and treasures. Use the cash to buy goodies at each village's country store.

Landstalker is just one of many new action RPGs that are emerging in Japan. Hopefully, this impressive game will stalk its way to the U.S. soon.