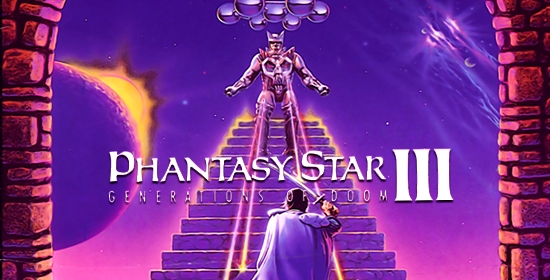 "A few months ago, a woman washed up on a nearby beach. Like a pebble dropped into a still pool, this minor event rippled through your world, triggering an epic adventure..." And so begins the third in the now-classic role play series, Phantasy Star. At the beginning of this one player Genesis title you discover that all of civilization was destroyed during the Dark Times when brave Orakio and his cyborg army battled evil Laya in her quest to rule the world.

Now, 1,000 years later, you as Prince Rhys, a young Orakio warrior, set out to rescue your kidnapped bride-to-be from the Layans. The different experiences you have and the choices you make determine the outcome of the game as you explore seven different worlds and two moons. To finish the game you must play through three different generations of characters who age, marry, grow old, and die during the game. In fact, the choices you make, such as deciding which of two different women to marry, alter the flow of the game, determining which characters you will become in the second and third generations and ultimately leading you to one of four different endings -- all of which tie in with Phantasy Star II.

The style of game play is familiar to fans of the Phantasy Star trilogy. As you journey throughout the countryside you view the action from a 3/4 overhead perspective and then a first person perspective when you go into battle. You've also got easy access to standard RPG windows that enable you to arm your characters, decide how to fight, use spells, and just plain strategize!

In each of the three different generations you and your companions (who you'll meet along the way) wander from area to area in classic role play style, searching for special items and clues to help you solve your quest.

Along the way you'll do battle with hordes of all-new frightening creatures in some of the most difficult battles yet in the Phantasy Star trilogy, including creatures such as the deadly Moos and the poisonous Glowtoad. Your battles with these devastating enemies enable you and your party to build up your experience points, weapons, and levels of strength in order to survive ever increasing perils. It's up to you to arm your characters and decide how to best use their unique strengths, including spells, to successfully battle your foes.

Three Strikes and You're Out?

Fans of the series won't be disappointed with this latest epic adventure. The gorgeous 3-D graphics, including beautiful landscapes and wonderful animation, are enhanced by an above average sound track. Is this the best Phantasy Star adventure yet? The answer to that question is up to you! Will there be a Phantasy Star IV? Only Sega knows for sure but we're willing to bet 1,000 Mesetas that there will be. (P.S. Sega will be providing a hint book with clues and maps to help guide you through each of the three different generations.)

Reviewing Phantasy Star III is a piece of cake! I'll just smile mysteriously and give a big thumbs up to all the PSI and PSII players, and they'll know exactly what I'm saying.

Phantasy Star III is, as anticipated, more of the same, only better. Subtitled Generations of Doom, PSIII picks up 1,000 years after PSII and spans three generations of heroes. The land is again beset with bizarre creatures. One swoops down during your marriage ceremony and carries off Maia, your intended. As Rhys, you hack and slash your way around three planets, looking for Maia and enlisting the aid of other characters. You can add up to four characters to your party for a total of five, but that number fluctuates as characters turn against you, get desk jobs or whatever.

Eventually you'll rescue Maia, but here's the first twist: you must choose between marrying her or marrying one of the female members of your party. Depending on your choice, the game will change completely! In either case, you become a king, and the game skips ahead about 15 years. The planetary system is faced with a new threat. Now you're the son of Rhys and his wife, and you undertake a new adventure. Later on, you'll again have a choice of brides. You then assume the role of the new couple's child - thus you play out the roles of grandfather, father and son over a period of over 30 years. Truly an epic adventure.

As you play, you'll find the world has expanded to comprise seven "planets", two moons and countless dungeons. You'll confront Dark Force, the ultimate evil (familiar from earlier adventures). He takes up three- fourths of the screen and is so large you have to attack his claws separately! At the end of the game - there are four possible endings, depending on your marriage choices - you'll learn the heretofore unknown history of the Algol system.

Due to the four variations, the innumerable plot twists and assorted surprises, the game is truly repayable on a grand scale. Finishing a single game will probably take you at least 50-60 hours, so this is one cartridge guaranteed to give you your money's worth, even at its higher price. The battery backup saves only two games, so it'll take skillful management to avoid having to play each of the four possible adventures from scratch.

The graphics are slightly improved over those of PSII. In combat, your enemies - many of which are huge - are crudely animated against appropriate backgrounds (no more grids). Some backgrounds even feature multilevel scrolling. The dungeons no longer have the confusing grid overlaid on top, and none are more than two or three levels deep. Unfortunately, there's no first-person perspective like in PSI dungeons, which is a shame, since it was spectacularly smooth.

You have to love combat to love PSIII. As in earlier episodes, every few steps end in a battle sequence. The combat system is convenient, offering both computer-controlled and step-by-step strategies. But the computer never uses your "techniques" (magic spells), so if you want to use these abilities, you'll need to program combat piecemeal.

As in PSI and PSII, there's not enough variety in the music; in fact, there seems to be less music than in smaller Genesis games. Then again, it's hard to include 200 hours' worth of music in one little cart.

In summation, Phantasy Star fanatics will be delighted with PSIII, as will anybody in search of a great role-playing game. It's more than a game, actually; it's an obsession and a more delightful one than ever.

By the Time You Get through Phantasy Star III, You'll Get Married, Grow Old, and And Die Three Times

Get a life. Actually, get multiple lives, and a couple of wives, and some kids too. It's up to you. Welcome to the world of Phantasy Star, the new role-playing odyssey from Sega that spans three generations of characters. It's big, real big.

What do you expect? It's from the same people who gave you mind-benders like Phantasy Star II and Sword of Vermilion. And take our word for it, you're in for the long haul with this one. Phantasy Star III will take you hundreds of hours to complete, if you're lucky.

Besides, you can always buy the hint book. Which could come in handy with a game that unfolds into four different endings. Of course, finishing Phantasy Star III will take a lot more than a hint book. It'll take endless skill and intense concentration. Not to mention a good chunk of your life.

The saga continues! This time the action spans over three generations as your characters get married, have children, grow old, and die. All this and much more in this very unique cart!

Phantasy Star -- you loved it the first time, you couldn't get your hands on the sequel fast enough, just imagine how you're going feel about part III! Yes, Phantasy Phreaks, the epic role play saga continues. This time, however, it's bigger and better than ever. As you travel through the seven Journeys (including nine different Worlds and Moons), you'll have the pleasure of becoming even more deeply involved with the characters as you share in their life experiences, such as marriage, aging, and even death. Set aside hundreds of hours to complete this mega-star adventure. If you think you were hooked before, just wait until you enter the third Phantasy dimension.

Alright, alright, we know that you just got Part Two of this monumental graphic/RPG series...but just look what's in store once you finish it! Introduced with surprisingly good timing, part three continues the PS theme in an all-new direction! Like the second Phantasy Star, the third installment of the trilogy boasts a full six meg of power and a battery back-up! Look for it to be announced soon in the states!

The third in the Phantasy Star series is in process of being converted for the Genesis. Text translation (the hardest part) is under way and this version promises to be the best one yet! Special features include 7 different worlds to explore and characters which will age, marry, grow old and die! The children are the ones which will survive in the end. Another much welcomed feature is that the game isn't 'linear' - that is only one way to get to the end. For instance, should you decide not to marry, you will take a different path to one of the four endings. With improved graphics and better battle scenes, PS3 will be a game worth waiting for.

Phantasy Star fans, rejoice! The third PS adventure has arrived. You are Orakio, the brave adventurer who sets out to bring peace to the land once again. Your new adversary is tougher than before and you'll need all your strength and skill to win the game. Visit towns, explore the countryside, battle vicious creatures, meet new people, fight with new weapons, discover new items. You decide your destiny!

PS3 is different from the first two quests in many ways, but the basic play hasn't changed much. You wander about, fighting different enemies, creating stronger characters as you collect people and solve mysteries. A better-than-average RPG with nice graphics.

A definite winner! This amazing follow-up takes the proven Phantasy Star theme and expands it over the ages to include a changing storyline that twists and turns depending on the marriages that take place. Guide your charac-ters to each of the different endings! Amazing!

One of the best RPGs ever! Phantasy Star 3 blows away the previous games, although it isn't necessarily more challenging overall. The game throws in a lot of new features like different generations who each will encounter their own quests to overcome. Awesome RPG!

Phantasy Star 3 is a good adventure game, especially if you were a fan of the first two. Colorful graphics, good sound, involving story and the size of the game were all pluses. However, I still enjoyed Y's Book 1 and 2 better than this game. Still, if you're a Genesis adventurer, PS3 will do.

Shining Force 2
In the eerie Cave of the Past, a mischievous thief tampers with the mystical Stones of Light and Dark. The Stones once imprisoned the Evil of All Ages. Now the deadly Zeon is unleashed. His rage will hurl the galaxy into eternal darkness - unless the Shining Force can stop him! The legendary epic resumes with an entirely new story, awesome cinematic battle sequences and incredible monsters! Build an awesome 12-member strike force from over 20 characters and develop them into fiercer, stronger, more magical warriors!

Soleil
Crusader of Centy is an Action Role-Playing game, developed by NexTech and published by ATLUS, which was released in 1994.