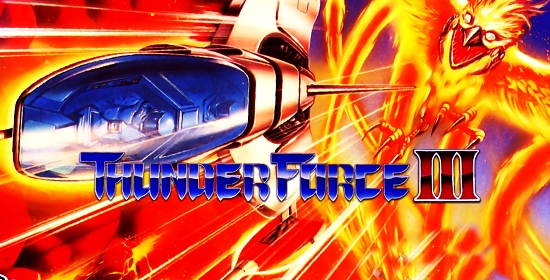 Hop in you starfighter and jump into battle with hundreds of invading alien warships. Their attack is unrelentless and many times without warning but you can power up a few times where your weaponry assumes awesome proportions. Tack on a shield, a claw and you're ready for anything they can throw at you. It's a very intense shooter with some of the best graphics ever seen on a video game system.

Thunder Force 3 is as close to the perfect shooter as you can get. Eight explosive levels of blast-em-away action highlight this cart that is definitely in a class by itself! The graphics, sound, music, full-screen Bosses and intense firepower all conspire to an incredible games.

This is the best shooter ever made! Thunder Force 3 would be a perfect 10 if the game did rush by so quickly. Despite the difficulty problem, however, this game is the most magnificent looking sounding and playing shoot-em-up ever created for any system!

A very addictive shooter with more than enough firepower choices. Interesting use of background scroll throughout, Great music accompanies game play well, Conventional, but great fun nevertheless. A cousin to Gradius and that's OK with me. What a family!

Although we still don't know whatever happened to the original Thunder Force, the second installment has proved to be an outstanding shooter. Forget everything you've come to expect from horizontal destruction, and prepare yourself for the latest installment of the Thunder Force saga lands in stores later this year!

As you can tell from the pictures, Thunder Force 3 is a graphic tour-de-force. Not only do the attacking aliens come to life in this strictly side-scrolling shoot ing game (the overhead scenes from part two have been mercifully ditched), but the backgrounds animate and pulse in vibrant detail! Special maps, enormous Bosses, and incredibly weaponry make this a shooter with no equal!

Gone are the boring overhead scenes from Thunder Force 2, replaced exclusively by scrolling backgrounds and obstacles that fly past at dizzying speeds. Each round leads up to a specific objective and some of the wildest Boss enemies ever created! Thunder Force 3 is a blaster without equal, and a sure favorite of all Genesis owners who like a game that offers much more than good looks!

Thunder Force II was - and still - is one of the best of the early Genesis titles, so I was intrigued when I heard that Technosoft was considering another sequel. I had my doubts as to whether they would actually be able to improve on the original, but now that I have seen "Number 3" in progress, suspicion is no longer necessary.

The cart I received was a work-in-progress, complete with an intermission screen that proclaimed in big, bold letters, "Coming Soon". Only three worlds were finished, and each one could be entered at the options screen. If this trio is any indication of go what's to come, we're in for a treat.

Parallax scrolling is used quite elegantly to simulate the third dimension (into the screen), in an otherwise two-dimensional, horizontally scrolling shooter. Having more than one moving background aids the illusion of depth.

Another graphic technique that is put to good advantage is the use of simulated three-dimensional objects that appear to rotate as they move. The dual-drone protectors, a weapon system obtained early on in the contest that hovers around your spacecraft, are excellent examples.

The robotic snakes deserve special mention. They fill nearly a third of the playscreen and are actually many individual sprites connected together like vertebrae. The exceptional point here is the fact that they move fluidly, without, even a hint of screen flicker. Technosoft has used a technique that would have really helped out other games that use large boss characters, particularly Altered Beast, which had a lot of problems with flicker.

Digitized voices announce the addition of new weapon systems to your arsenal. These voices run in the background and do not slow down or interrupt the game. Now, if they would translate what seem to be Japanese words into English, all would be right with the world.

As in the original, game mechanics are very simple. Button "A" provides a burst of speed, Button "B" is continuous rapid fire and Button "C" allows the player to select a different weapon system from his/her inventory.

These weapon systems are wonderful and varied, and both forward and reverse fires are supported. The sound effects are very realistic and are accompanied by excellent explosion sprites.

Something seems to be missing, though. In Thunder Force II, a player was treated to overhead perspective sequences every other level. These are either totally absent in Thunder Force III or perhaps still in the programming stages. I hope Technosoft will continue this tradition. It provided variety, and that is, after all, the spice of life.

The one feature that would have capped an excellent effort in both TF2 and TF3 is the addition of a two-player option. All things considered, Technosoft already has a bona fide hit on their hands. Thunder Force III truly defines the expression "bringing the arcade home"!

The menacing empire of destruction has returned! Your job is to deal with the armada in this super intensive side-scroller. Great music and power-ups enrich this fantastic cart!

BlaZeon: The Bio-Cyborg Challenge
It's a horizontally scrolling shoot 'em up arcade game.

Phalanx: The Enforce Fighter A-144
Phalanx is a space shooter video game.