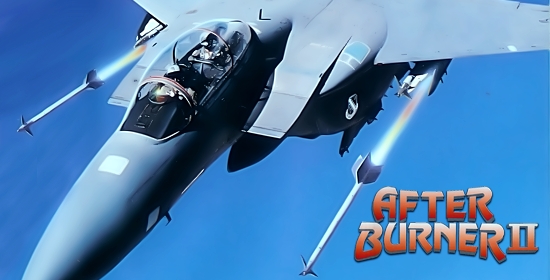 After Burner 2 for the Genesis is a rip-roaring airborne combat game that duplicates the high frying action from the arcade title and the NES game of the same name. This take-no-prisoners air-to-air shoot-em-up defined the genre.

You're a carrier-based fighter pilot who takes on a ruthless air armada. Who's the enemy? Who knows! And who cares. If you want a storyline, try Phantasy Star II. The premium here is on reflex and reaction, not problem-solving. There's little time to stop and think.

Arcade aces will recognize the now-classic After Burner behind-the-plane forward-looking view. Squadrons of enemy fighters attack you head on in endless waves, and interceptors sneak up on you from behind.

Overall, you get 23 good-looking stages. The graphics are sharp and colorful, but the scenery doesn't change much except for a few vivid night scenes.

For a change of face (and pace), Stages 8 and 17 feature bonus missions versus ground targets nestled in between a forest of gigantic stone pillars.

ProTip: ln the bonus rounds use the Slow button to weave through the pillars.

The aircraft are well-drawn though nondescript. Your fighter resembles a F-15 Strike Eagle. Among the mysterious enemy air forces we recognized Harriers and helicopters. But you really don't have time to admire the scenery, anyway.

After Burner doesn't offer a great variety of game-play. The barrel roll is your slickest move. Other than that, you fly left or right, up or down, slow or fast (that's the "afterburner" part). However, the action is so fierce, that you don't notice the limited movement.

Move in a box pattern when the enemy jets get thick.

Most enemy jets start out as blips on the horizon, but they quickly become devastatingly clear. Some flights zoom by you from behind, they're dogmeat, but several lone interceptors latch on to your tail.

This game requires that the hand be quicker than the eye. Sometimes the screen gets so crowded with aircraft that it's tough to focus on one target. By the time you actually see an incoming missile, you're air pollution.

Well, you're no sitting duck. Your state-of-the-arcade Vulcan cannon and Sidewinder air-to-air missiles can do serious damage to the enemy -- if you're fast enough on the draw. You get a floating crosshair that hovers just off the nose of your jet. You can set cannons to continuous fire or assign the trigger to any button. To fire a missile position your sights on a bogey and the computer voice yells, "Lock!" Then you squeeze off a missile that homes in on the target, so once you fire one, quickly seek out another target. A tiny radar screen helps you watch your tail.

Use the Speed button to escape missiles on your tail. Remember: Rear radar can't pick up missiles.

Fight to the Finish

After Burner compensates for Spartan movements with an overwhelming enemy force. Bust through to Stage 23, and you'll really have earned your wings.

After Burner isn't the only way to fly, but fanatic jet jockeys may want to give it a try.

Afterburner 2 for the Genesis takes you up into the skies as no other aerial shooter has ever done before. Virtually identical as the arcade version you must take on hundreds of enemy helicopters, jets and aircraft in 23 explosive levels of realistic dogfights. All of the moves including the complex barrel roll are faithfully duplicated and even the scaling of the ground terrain is smooth and realistic.

After Burner 2 is as close as you can get to the real arcade! While the backgrounds are not as detailed, they do animate and scroll very smoothly. The action is chaotic and non-stop, with stream of planes attacking at all times. Superb!

Spectacular, phenomenal, awesome! Need I say any more? This is the arcade game. Great scaling, the barrel roll is well executed and all of the details are in the home version of the game. The only thing missing is the special XE-1AP controller.

After Burner 2 copies the intense action of the arcade nearly pixel for pixel. Barrel rolls, launching missiles and even firing your after burners are all a part of the action. Plenty of enemy planes fill the skies and large carge planes refuel in mid-air!

A very, very intense, wipe the sweat of your brow, type of game! Incredibly addictive gameplay with true 'scaling'. Offers a 3-D type perspective in this flight simulator. Better than the coin-op and certainly MORE fun!

The sequel to the popular coin-op game is now on the Genesis! This fast paced-forward scrolling shooter is chock-full of enemy planes just waiting for a chance to blow you out of the air!

AFTER BURNER IS A GREAT GAME MY KIDS SEEEM NOT TO LIKE IT TO MUCH BUT THEY PLAY IT THEY THINK ITS CHALLENGING. WE ALL LIKE THE GRAPHICS AND THE CAPABILITIES OF THE FIGHTTER YOU ARE PILOTING

LHX Attack Chopper
Be the first to fly the high-tech LHX, America's next generation combat helicopter.