D&D - Warriors of the Eternal Sun 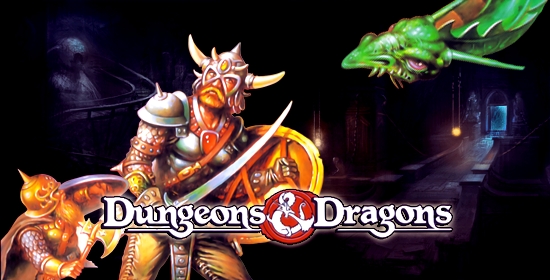 Duke Hector Barrik's people have suffered through famine, plagues, and wars, but the worst was yet to come. At the height of despair, unknown forces ripped the Duke's stronghold and surrounding lands from the face of The Known World. When the populace regained consciousness, they found themselves in a deep, desolate valley.

A hot, fiery sun beat down from the sky and Beastmen threatened to storm the castle. As the town guards try to placate the frantic populace, the Duke calls on you to protect his castle from the Beastmen.

In Warriors of the Eternal Sun, a role- playing game for the Genesis, you must seek out Barrik's allies before his castle falls. Court wizard Marmellian guides your journey with instructions each time you return to the Keep. As you search caverns and temples for allies, you find artifacts from ancient tribes. Marmellian's suspicions grow. He believes that many different civilizations have been trapped in Hollow World. Meanwhile, the townspeople are going mad! Is the throbbing, Eternal Sun to blame, or is something far more evil at work?

First, you generate scores in six characteristics for your four Warriors. Then you choose their professions. Your options are a human fighter, a human thief, a human magic-user, a human cleric, a dwarf, an elf, or a halfling. Each class has distinct abilities, and your characters' skills increase with experience levels.

Before setting foot on Hollow World's turf, you can shop for weapons, armaments, and magic spells. If you're injured, the temple provides free of charge first aid. Also, you can purchase a caravan ticket to save wear and tear on your feet. Dialogue with the townsfolk will give you a few pointers, but their sanity slips later in the game. Plot development and communication is less important than exploration and battle.

ProTip: Search the northeast guard tower for this Sword +1! Also, in a dungeon near the magic shop, look for a Wand of Lightning Bolts and a Sleep Scroll.

The smooth scrolling graphics are sharp, and the travelers' tunes are merry. Outdoors, and in town, you see all four of your comrades in an angled, top-down perspective. Hollow World's landscaping is particularly picturesque with waterfalls, cliffs, shrubs, and swamps all integrated flawlessly. You can camp outdoors, and save four game files.

Cross paths with an enemy and there's no time to negotiate -- only to fight. The excellent tactical combat is shown to scale, and you hear great grunts and sound effects. You take turns commanding each character to attack, retreat, cast a spell, or use an item. You can even use terrain features for a strategic edge! Level-building is a necessary survival tactic before you brave the underground.

To reach each civilization, you must journey through underground areas. This dungeon view is first-person, and the action's real-time! All the monsters move and do their own thing while you're exploring. Visually these scenes aren't eye-popping, but they look 16-bit clean. Maze busters will take Warriors' 14 labyrinth levels in stride. A handy auto-mapping feature does the dirty work for you. However, each time you exit a dungeon, the map is erased from memory!

The Azcan Chiefs fire walking secrets are guarded within this temple.

However, Eternal Sun's story line is one-dimensional with few subplots and little background information on Hollow World. Interaction and storytelling is overbalanced by combat.

Eternal Sun shines as a top-notch round of hack-'n'-bash adventure, but hard-core role-players will deem that it needs work. Reserve a place in your RPG trophy collection for the next D & D installment.

Sega takes one of the most popular role-playing series and puts it on the video screen! Dungeons & Dragons: Warriors of the Eternal Sun is an RPG with a unique overhead perspective. Your band of warriors must explore a whole new world that opened up in the Earth. You will face hordes of creatures out to make you their lunch! You can also purchase new weapons with the gold you collect from fallen enemies!

My feelings toward RPGs aside, this title could have been a killer it the game paid off to those people who will be attracted to its AD&D title and theme - AD&D fans. None of the background of characters or settings can be found in this title, which unfortunately plays like your typical RPG with some nice retouches. Too bad.

Don't let the name fool you into thinking that this is a hard core D & D cart. It isn't. It plays more like the typical RPG and, as such, it will be liked by a much wider audience. It looks good and has exceptional graphics for this type of game. If you're into RPG's give this one a try you won't be disappointed.

Need I say it? I really am not a fan of this style of game. The graphics are nice and the overhead perspective makes the game much easier on your eyes, but I did not find anything here that I really liked. For RPG fans, this cart will surely be what they are looking for. For me, it surely was not.

Hey, this is a good quest! I thoroughly enjoy the overhead perspective instead of first-person for reason of sanity. The control is very good, and the quest is fun enough to warrant a look-see. It could have been longer, but at least I enjoyed getting through it. Tack on some good music and you have a decent game.

The King is in a terrible dilemma! The Goblins and demi-humans are attacking the kingdom! Just when this seemed like enough, an earthquake occurred. It ripped a hole in the planet causing the castle to take a plunge into the great abyss. When the people awoke, they found a new world to explore!

The King needs four brave warriors to learn the secrets of this land. As one such warrior, you will cross huge lands in an Ultima-type view. You can check the condition of your character at any time during play! Role playing fans should not miss out on Warriors of the Eternal Sun!

In this first official Dungeons and Dragons role-playing title for the Genesis you assemble a band of companions to help you explore a new world. Choose from fighters, clerics, magic users, elves, dwarves, halfings, and thieves. Outfit your company wisely and prepare to dabble in magic and intrigue. Fight for your life as you explore a world depicted with gorgeous 3-D graphics. Designed to capture the D & D gaming experience, this one looks hot!

The legendary Dungeons and Dragons world comes to the Genesis. Create your own character from classes such as Fighter, Elf and Magic User to go on an adventure of a lifetime. You've been transported to an inescapable valley you have to fight and think your way through this unknown place and the ability to play from two different perspectives only enhances the gameplay.

Weeks of fighting with goblins have led to the deaths of many. The duke's castle is the last defense against these monsters. As the goblins make their final attack the sky flashes and the earth shakes. Before you know it, the castle is sucked away from defeat by the goblins and placed in a strange new world. Thus begins your adventure in Dungeons and Dragons-Warriors of the Eternal Sun.

The castle is located at the bottom of a valley surrounded by unclimbable walls. Monsters roam the wilderness and the people fear they will be overcome by these new enemies. Your mission is to lead a party of heroes and explore the new land.

You lead a party of four characters (either the default party or one that you have created). Characters and races can be chosen from the normal D&D options. The gameworld is viewed from an isometric perspective and the characters can roam around in realtime Battles are turn based. Like most roleplaying games, the gaming experience focuses on exploration, inventory management and character development.

Save the kingdom from complete madness and find some allies in this strange new world.

D&D Warriors of the Eternal Sun is an excellent game. Unlike most of the D&D games on the early platforms, this game was a lot of fun to play and fairly easy to control. Round based combat with the option to move your character as well as decide what action to take was a stroke of genius. It gave us D&D players a flashback to playing for real. It also used the same D&D rules we are used to. The graphics were pleasing to the eye and the sounds were wonderful. The score for this game was one of the best I've heard. It really made you want to go out and adventure. There were also a lot of secrets to find with great rewards like magic items and weapons. The map isn't too big, but there is still a lot of game-play to be had. I think you will find yourself walking the length of the map a good many times. D&D Warriors of the Eternal Sun is a great RPG. If you like D&D, or if you are just a fan of all RPG's, give this game a try!

Warriors of the Eternal Sun is a mix between a dungeon crawler title and a turn-based RPG. You design your team from several races (elves, hobbits, humans, ect.) and classes (mages, fighters, ect.) and set your own stats of your future team. The turn-based part of this game isn't all too bad. You move through the wilderness of the surrounding castle and attempt to make it to the dungeon crawler part. But before that you must encounter the enemy... Usually at the start you get approached by a snake or a boar and the battle begins. Your party takes turns attack with either weapons or magic, most of the time missing. If your party isn't "pre-programmed" to their proper attack style, they are the first to die. If you survive the snake attack and make it to the cave, here is the dungeon crawler part.

You explore the best part of the game, the dungeon. Battling takes place in another turn-based battle, except not as complicated. You have a sidebar with options used to make your way through each of the obstacles. Grab the important treasure and beat the boss (if there is a boss.) Than you leave the best part of the game... and back through the wilderness, run past all the mice and ogres, go back to the King, explain what happened and be given another assignment... it's like that throughout most of the game.

Dungeons and Dragons: Warrriors of the Eternal Sun was one of the many games released due to the success of the Dungeons and Dragons role-playing games, or RPGs for short. The game was designed by Westwood Associates (known for the Lands of Lore series), published by Sega, and released on the Sega Genesis/Megadrive in 1992.