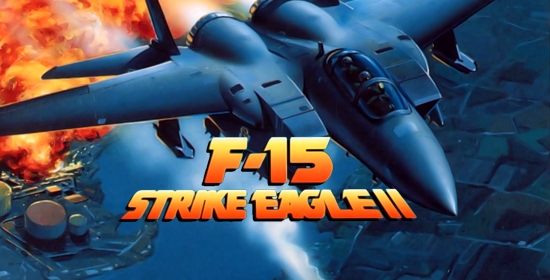 Good old MicroProse. Some of its recent flight sims may have been a bit on the duff side, but in its time the company has produced a wealth of classics and this was once one of them. So what do you get for your 17 quid? Let's start with the packaging, which is excellent for a budget game: full size box, full size manual and an A5 technical reference booklet which also contains the maps for the six war zones in the game.

So what of the game itself? Well, essentially F-15 Strike Eagle II is an arcade flight sim, meaning it's not overly high on realism but is choc full of action, with all the war zones providing a target rich environment, both in the air and on the ground. You fly missions, earn medals and get promoted. Your weapons? The amraam medium range radar guided air-to-air, the AIM-9M short range, infra-red air-to-air and the AGM-65D Maverick air-to-ground Tire and forget'. The other aircraft in the game include the Falcon, Hornet, Intruder, Harrier and a list of MiGs as long as a windsock. There's a wide choice of war zones too: Middle East, Libya, Persian Gulf and Vietnam.

You won't find any texture mapping or 'guru' shading in F-15 Strike Eagle II, but what there is well defined, good to look at and gives a realistic impression of both altitude and speed. And, of course, the usual MicroProse compendium of exterior views is at hand. There's even a 'director mode' that switches views automatically (for instance if someone fires a sam at you, the viewpoint will pop to the ground and you'll see it happen). F-15 Strike Eagle II is, at the end of the day, good old-fashioned fun with no over-complicated frills - ideal for a novice to cut his or her flying teeth on. Good fun at a great price.

Another highly popular computer war simulation which Sega is having converted to the Genesis is F-15 Strike Eagle 2. This simulation puts you in the cockpit of one of the most sophisticated jet fighters in the air today. Everything is there for you, forward and backward radar, altitude, speed, direction - all in a convenient heads-up display. Your missions involve destroying enemy ground bases and they will be throwing everything they have at you from the air and from the ground.

Prepare to strap yourself into America's hottest fighter, the F-15 Strike Eagle. MicroProse has just brought the smash PC title to the Sega Genesis, and it's a winner. This game is loaded with intense dogfights, great sound, cool action, and groovin' graphics. Climb on board and prepare to go head- to-head with some of the world's deadliest jet fighters.

This one-player flight simulator puts you in the cockpit of the awesome F-15 Strike Eagle aircraft. The game offers six intense combat missions that you can fly on any of the game's four difficulty levels -- Rookie, Pilot, Veteran, or Ace. You fly from Libya (the easiest mission) to Europe (the hairiest). Each mission has specific targets that must be destroyed, such as Enemy Camps, Radar Sites and Patrol Boats. Success earns you promotions and medals. Failure grounds you behind a desk, if you're lucky, and sticks you in a permanent holding pattern six feet under if you're not.

Your F-l 5 is armed to the teeth with Sidewinder, AMRAAM, and Maverick Missiles, as well as a 20mm Vulcan Cannon for close combat. You'll fight some hot enemy jets, but don't be surprised if you encounter an American aircraft, such as the F-5 Tiger or the F-4 Phantom, with an enemy designation. If you do, don't hesitate to shoot.

Strike Eagle's polygon-based graphics are definitely above average. The pix of the aircraft's targets are particularly sharp. Among them you see detailed SAMs, Radar Sites, and Patrol Boats. Most aircraft are accurately represented, with the exception of the American F-18 Hornet. The scrolling is a bit choppy, but you can smooth it out by reducing the graphic detail. Of course, the trade-off is a pixilated display.

Overall, Strike Eagle's sounds are good. You hear satisfactory effects that range from launching missiles to exploding targets. In addition, the music scores are catchy, varying from somber in between missions to absolutely adrenaline-pumping when you're flying your Eagle. You can also turn sound and music off, should you want to hum "Into the Wild Blue Yonder."

If you have trouble landing your Eagle, turn on your Autopilot for a picture-perfect landing.

The aircraft's controls are fairly easy to master. Even at supersonic speeds, you control everything on your fighter, with the exception of yaw and pitch rates (attack angles based on your aircraft's vertical and horizontal axes). Just the same, quick wits and reflexes, plus the ability to keep cool under pressure, are essential for survival.

Soar with the Eagles

F-15 Strike Eagle II is a challenging game that will make your palms sweat and turn your knuckles white. Put on your Genesis flight suit and come soar with the Eagles, if you dare.

F-15 Strike Eagle 2 is a second game in the series features campaigns in Lybia, the Persian Gulf, The Middle East and Vietnam, making for a total of 250,000 miles of potential action and danger. Primary and secondary aerial and ground-based targets must be destroyed on each of these. You are armed with a cannon, AMRAAM long-range air-to-air missile, Sidewinder short-range air-to-air missile, and the Maverick air-to-ground missile.

11 camera angles including internal and external views of the plane exist. To help new players there is a training mode, with options to disable crashes and automate take-off and landing. Enemy AI is responsive, but a targeting computer helps you take them out before they can do it to you.

F-15 Strike Eagle 2 incorporates two "Director's Modes" which cuts away from your cockpit to highlight special events occurring elsewhere in the game world, like enemy base launching fighters, SAM sites launching SAMs, and your missiles hitting the target.