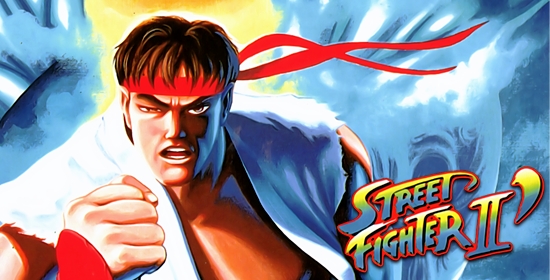 You must defeat Sheng Long to stand a chance.

And who is the mysterious Sheng Long? Well, it's Japanese for the mighty Dragon Punch! Just walk to a local arcade and you'll see why this formidable move, as well as hundreds of others, are such the rage throughout the world! Street Fighter II: The World Warrior is one-on-one fighting action at its best! Superb graphics, fluid animation, and a rocking sound track compose the hottest coin-op to date. Each World Warrior has over 36 attacks, including numerous special techniques! If you want to taste the excitement, no other game will stack up to pure power this game controls. So, here is the long-awaited GameFabrique profile of this marvelous game, so large it's spread over two special issues! In part two. GameFabrique will finish the character profiles and go over advanced strategy and techniques!

After every three fights, you are sent to a special bonus round to test your skills and abilities as a true World Warrior.

Take your frustrations out on the car and score big!

This is easy. Just crush the cans with your fists!

Ryu is a defensive fighter, using techniques and well-timed attacks to over power his opponent. He lives for the fight.

Guile relies on counter attacks to win his bouts. His Somersault Kick is a devastating blow to his opponents. He is out for revenge against M. Bison.

Dhalsim is a limber dude determined to spread discipline throughout the world. His pliable limbs are deadly.

Zangief is a Soviet wrestler out to do his country proud by defeating the renegade M. Bison. He's as strong as an ox.

Tips for street fighters in training:

Where It All Began

The thing with a collection like The Street Fighter Collection 2 is that the first game, The World Warrior is only really worth playing once or twice to see where it all began. In Champion Edition you could now play as the four bosses and play mirror matches. In Turbo/Hyper Fighting the game moves much faster and some of the characters have new moves such as Sagat having a flying knee, Chun-Li having a fireball, and more! Turbo is probably my favorite of the original Street Fighter 2 games and that is one I would always play on this collection.

Welcome To The Museum

One of the things that I thought was really cool about this Street Fighter 2 Plus Champion Edition Collection is the museum. Here you can look at images and learn more about the world of Street Fighter II. For fans stuff like this is awesome and while more modern collections would expand upon this. At the time this was the best way to learn about the history of Street Fighter II.

Looking back at a game like the Street Fighter Collection 2 is kind of tough. These are three fantastic games and Turbo is one of my favorite fighting games of all time. The museum is really cool and the games look and play just like they did in the arcade. I just feel that they could have bundled this in with the first collection as all three of these games fit comfortably on one disc. It has been surpassed by more modern Street Fighter Collections, but if you enjoy the original Street Fighter II series, you will like what this has to offer.

It's about time that SF2 came out for the Genesis. All the problems that seemed to plague the first version of SF2 CE were hammered out - like the black bar and such. Now, this version looks and plays just like the Super NES version minus a few colors. The Group Battle Mode is a neat touch, but doesn't save it from an 8. Though the graphics are there, the sound track and voices are horrible! It really is that bad!

Well, it's here and it's everything I wanted, except for The Flaw. The game is a blast and has all the same characters, moves and combos as before, but now includes a terrific Group Battle Mode for even more fun. Don't even think about using the 3-button controller - it blows. Use a 6-button and you'll be much happier. Now for The Flaw. The sound is horrible and it sounds like each character has laryngitis.

Every Genesis owner's dream come true is here! SF2 CE is a faithful translation of the arcade smash - plus more. There are enhancements that aren't even in the Super NES version. Special matches and eliminations make this a great cart to play with a group of friends. The graphics have greatly improved and the speed is even faster, too! Problem# 1: You need the 6-button control to enjoy it.

It's here! SFII Champion Edition has all the aspects of the Super NES version and even more! The Team Match Modes are a big plus, and the special moves are even easier to get off! You should have the new 6-button controller (toggling between kicks and punches by pressing START on the 3-button 'troller' is maddening), but the voices could have used MUCH more work! Overall, a very good fighting game.

It's back! Sorry about the delay, but by now Genesis fans everywhere should finally have their grubby little paws on Street Fighter II Special Champion Edition. We originally previewed this game back in June, but Capcom delayed its release until September... all that summer leisure down the drain. But, hey, now it's out, and the sky is bluer, the grass is greener, and bluebirds everywhere sing in unison.

Champion Edition went through a few changes since we last saw it, so let's bring you up to speed on how this hot cart has progressed. The prototype we played earlier was good enough to earn our Game Players "Ultimate!" Award - but this new version is even better!

Okay, okay... so this Genesis version of Street Fighter II took a little longer than people had planned. Don't worry, the wait was worth it! The most awesome fighting game of the '90's has just hit the Genesis!

Genesis owners can stop their moaning, because this edition of Street Fighter is as good as the others for the SNES. It includes complete Champion Edition game play. You can obviously play as any of the bosses plus you can pull off CE-specific moves, like Guile's Knee Trust. Plus the excellent Turbo Mode includes all the moves from the arcade Turbo game, such as Chun Li's Fireball. The Turbo Mode even has selectable speed -- up to ten stars and you don't have to enter a code to access it. There's more: A brand new Mode of play called Group Battle enables, you to set up your own two-player tournament. This latest version includes graphics that have been dramatically improves upon with large, fully detailed sprites, great color shading and better vivid visuals to the backgrounds.

We'll have complete review of the game in our next issue. In the meantime, Genesis Street Fighters stop your whining and get out there and kick some Special Edition butt!

Streetfighter II black belts will find themselves at home with the beat-'em-up action in the Championship Edition. It features the same graphics and game controls as the first edition. The fights even take place in the same 12 areas.

The most notable feature upgrade is the ability of both players to choose from all 12 characters, including Balrog, Vega, Sagat, and M. Bison. These characters were reserved for the computer in the original game. For true head-to-head challenges, two players can also fight each other as the same character. Instead of the 28 possible match-ups in Streetfighter II, the Championship Edition offers a mind-blowing 78 possible fights!

Several characters have new and improved moves in their deadly repertoires. If you think you've mastered all the Streetfighter techniques, take a peek at these:

Chun Li: When you're in throwing range, press Towards plus Roundhouse. She'll jump up, kick her opponent in the chest, flip into the air, and land on his head with a downwards kick.

Chun Li: Also when in you're in throwing range, press Towards plus the Forward Kick. She'll make a flip kick to the chest and automatically flip backwards to safety.

Ken and Ryu: Their Dragon Punches have been pumped up to cover a wider area of attack.

M. Bison: Push Down while you press Roundhouse. He'll jump onto an opponent's head, landing on his chest with a downwards punch.

M. Bison: To launch an awesome aerial drill attack, pull away from an opponent for two seconds. Then push Towards, while simultaneously pressing any punch button.

Blanka: It's easier to charge his electricity, even if you use the Fierce punch button.

Sagat: Throw high and low fireballs by using the Punch or Kick button and the correct joystick rotation.

E. Honda: The sumo headbutt attack is faster and meaner.

E. Honda: Use the Fierce button to launch a series of rapid sumo punches.

Balrog: Headbutt opponents when you get within throwing range.

Zangief: You move towards your opponent when you engage the spinning attacks.

This version for Genesis has re-worked sounds and voices if you compare it to the SNES version, with less colors, Although the options for Turbo made it a lot faster than its Nintendo counterpart The original Street Fighter 2 (aka Street Fighter 2 - The World Warrior) was apparently not released for the G/MD.

CAUTION: This Game Is Made In Japan

Double Dragon 3: The Rosetta Stone
The original martial arts adventure continues - all the hard-hitting arcade action is at your command! Battle your way across the globe with awesome special moves and lethal weapons straight from the arcade! Whether it's a swirling Hurricane Kick or a staggering One Armed Head Butt, you have what it takes to crush ruthless enemies in the Double Dragon adventure of a lifetime! Battle across America, China, Japan and Italy to your ultimate challenge in Egypt!

Fatal Fury 2
The sequel to Fatal Fury brings the Bogards back to the Neo-Geo.

Street Fighter 2 Special Champion Edition
From the corners of the globe come twelve of the toughest fighters to ever prowl the streets. Choose your champion and step into the arena as one of the eight original challengers or as one of the four Grand Masters! Pound your opponent as Balrog and knock them out for the count. Tower over your prey as Sagat and daze them with your awesome Tiger Shot. Slash your opponent with Vega's claw and send them running for cover. Or strike fear into your enemies as M. Bison, the greatest Grand Master of them all!