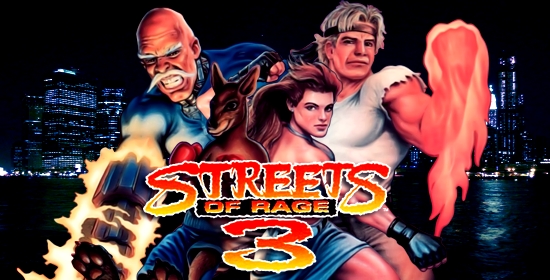 View all 39 Streets Of Rage 3 Screenshots

Yo, Ragers! It's clobberin' time again! In the grand tradition of side-scrolling, moon-walking mayhem, Streets of Rage 3 definitely has combat charm -- it may even knock you out.

Walking the Wild Side

In SOR 3, Mr. X is back to replace key city officials with robot replicas. Axel, Blaze, and Skate track X from SOR 2 to 3. This time, Dr. Zan, a renegade cyborg, joins the team, and if you're lucky, you'll find Roo, a marsupial friend. Punch in for one- or two-player action against X's gang, or if you just want to get it on against a pal, pull up Battle mode.

But if it's a street fight you want, then it's a street fight you'll get. X's X-menaces come at you in droves throughout seven mean stages. You must figure out how to outfight lowlifes like punkers with electrowhips, ninjas with throwing stars, and pistol-packing hit men. The stage bosses give your ego a good bruising, too, particularly Jet the aerial assassin and the mad robot maker.

ProTip: To beat back crowds, keep your back against a wall or the screen edge.

The Streets fight is familiar, fun, and ferocious. There are four endings depending on your final score. The challenge, even set on Easy, will knock out intermediate gamers. Don't hang at Easy, though -- you only play to Stage 5 at that setting.

Crossing from Streets 2 to Streets 3 is a breeze. Many moves are lifted straight out of Streets 2; however, a few SOR 2 standards are gone. For example, Skate has lost his slick Corkscrew kick.

At least Streets vets won't mourn lost moves for long. Not all the moves are listed in the manual, so you can discover them yourself. Great new moves include a Dash attack and directed energy punches and fireballs. Defense-minded fighters will like the new Duck and Roll that enables you to escape to the top or bottom of the screen. The game continues to put a nice mix of effortless moves at your thumbtips. You'll have a good time controlling your rage: Six-button controller support is a decided advantage over SOR 2's three-button finger fiddling.

The graphics and sounds are in line with the Streets tradition. It's a third go-round for most of the regular evildoers, though the invisible samurai bosses are definitely cool. At least the Japanese MegaDrive version, Bare Knuckles 3, dressed some enemies in hip-per (some would say racier) costumes. Slowdown sometimes rears its woozy head during crowded two-player co-op combat. The audio raves on the strength of Yuzo Koshiro's now famous techno-rock Streets of Rage tunes.

Streets of Rage 3 is like an old friend -- an old friend who won't stop trying to kick your butt! The fighting formula is still feisty, if familiar. But no one wants the Streets to be too safe, do they?

If you've never taken Axel for a spin and want to give it a shot, this is the one to try. You can't go wrong if you're already a fan. If there's one flaw, it's that you've seen all this has to offer in previous outings.

Mr. X is back to enslave an unsuspecting city. This time, the X man's going to replace key officials with robot duplicates. His goal: "X-treme" evil! This third installment of the classic side-scrolling, thug-thrashing game hopes to take you for another button-crunching march down the Streets of Rage.

Word on the Streets

Streets 3 will reunite the tough Streets of Rage 2 team: Axel, Blaze, and Skate. This time they're joined by Dr. Zan, a cyborg crook turned crime fighter. The bad guys in the game looked like the usual suspects: punks, bikers, and amazons -- all lowlifes!

Beat-em-up fans usually like a change of scenery to accompany their fighting, and Streets 3 accommodates with a 12-stage rumble through an urban jungle. However, Streets 3 also upholds the fighting- game trend with a one-on-one Battle mode, too.

The SOR gang looks ready to unleash a devastating assortment of attacks. In addition to the standard punch, kick, jump kick, and throw, each fighter will pull unique Dash Attacks, Back Attacks to the rear, and two types of Special Attacks. Stationary Attacks will unleash 360-degree destruction when you're standing still, and Directed Attacks will produce a flurry of automatic combo punches. Naturally, you'll be able to grab fast food for fuel and weapons for fun.

Will the third time be the charm? Four bone-breaking endings await your assault.